In an effort to increase awareness about the ''silent blinding diseases,'' this month has been declared National Glaucoma Awareness Month. Glaucoma is the leading cause of avoidable permanent vision loss, responsible for 9%-12% of all cases of complete vision loss in the United States and effecting nearly 70 million people worldwide. Because the disease has no early symptoms, research shows that close to 50% of patients with the disease are unaware of their condition.

Glaucoma is the name for a group of ocular diseases that damage the eye's optic nerve, which is responsible for carrying images to the brain. Although glaucoma can affect people of all ages, those at higher risk include African Americans above 40 years of age, senior citizens, particularly Mexican Americans, and those with a family history of the disease.

Because vision loss of this kind is irreversible, early diagnosis of glaucoma is crucial. Symptoms of the disease, however, are often not present before damage has taken place, and usually start with an irreversible loss of peripheral (side) vision.

There is no treatment for glaucoma, however current methods of treatment, including medication or surgery, can slow the progression of the disease and prevent increased vision loss. The preferred treatment is determined based on a few factors, which consider the type of damage and the advancement of the disease.

The NIH's National Eye Institute recently found that while ninety percent of people had heard of glaucoma, a mere eight percent were aware that it has no early warning signs. Only a qualified optometrist can detect the initial effects of glaucoma, using a comprehensive eye exam. We suggest a yearly screening as the most effective way to prevent damage from this potentially devastating disease. Don’t delay in scheduling your annual comprehensive eye exam before it’s too late.

In case of emergency, please phone our office at the number listed above and follow the instructions. 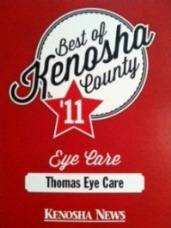